Yesterday, March 14th, in addition to being Albert Einstein’s 136th birthday, was Pi Day. March 14th = 3.14 = Pi Day. Since Physicist Larry Shaw put together the first official Pi Day celebration in San Francisco back in 1988, the deliciously mathematical holiday has only grown exponentially in popularity.

Last year, we focused more on the delicious side of Pi Day festivities. This year? We got down to pi business. Because many of our visitors are still in elementary school, trying to explain pi exclusively with terms like “irrational number”, “mathematical constant” or “Madhava-Leibniz series” isn’t exactly the most fruitful plan of attack.

So how can you make the math fun? Multiplication? No problem. Geometrical shapes? Sure. But the ratio of a circle’s circumference to its diameter? That’s a bit bigger of a fraction to follow!

Enter Museum Educator Sarah Terry. I asked Sarah, who returned to CMNH at the end of 2014 after first joining our team in October of 2011, how she approached a subject that seems, on the surface, to be rather dry and difficult to build a day of fun around.

“I’ve always thought math was a lot of fun,” Sarah said. “There’s something so satisfying about working with problems and equations that can be solved. In the humanities, you don’t come across too many situations where there is a definitive right answer. It tends to be based on opinion. Well-reasoned and supported opinions, but still debatable. The rationality of mathematics always seemed comforting in comparison.”

“When you come across something like pi, which is an infinite number with no apparent pattern or repetition, it’s pretty mind-blowing,” admits Sarah. “How can something as crazy and enormous of a number that’s been calculated out thus far to over 12 trillion digits also be considered a mathematical constant? Every circle that has been or ever will be created will find that its circumference divided by its diameter will be pi. It’s unwieldy and baffling and I looked forward to coming up with activities that could show our visitors that things as awesome as pi actually make math – yes, math – pretty cool!”

Using CMNH’s Colorful Classroom space as her home base, Sarah taught visitors young and old about pi. Some had never heard of it. Some had learned about it in school but had forgotten the specifics. Some were wearing Pi Day shirts. Using a variety of colorful craft activities coupled with the promise that if you located her over the course of Pi Day and recited a fact about Pi, Sarah would paint the pi symbol on your cheek, visitors left yesterday with a newfound appreciation – and hopefully, enthusiasm – for the wild, wacky, infinite constant that is pi!

We hope you and your family had a Happy Pi Day and look forward to you spending Pi Day 2016 with us here at CMNH!

“Pi lets us show off the oddball side of math and lets us stretch our imaginations,” Sarah said. 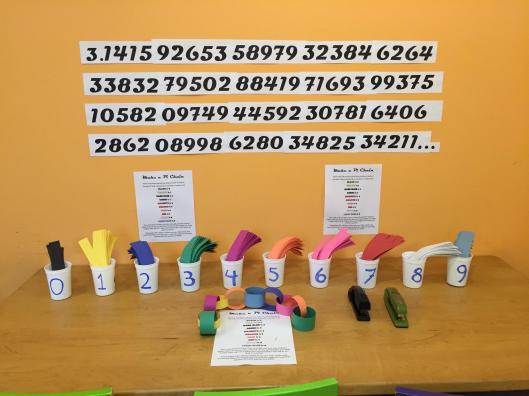 What’s a Pi Chain? Good question! Here’s the answer: 0-9 are each represented by a color. Following the order of numbers in pi, can you make an accurate chain that is correctly represented by the 10 colors? Can you make a longer Pi Day Pi Chain than your friends and family? 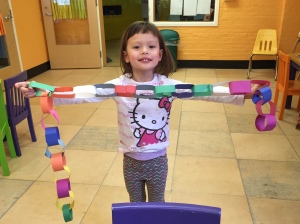 Even the streamers never rested from the continual recitation of pi! 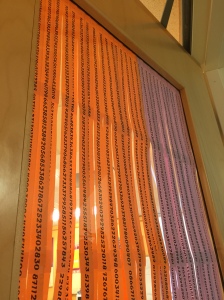 Pi Day is celebrated each March 14th. Get it? 3.14? I don’t want to get too bogged down in the origins of Pi Day or how the mathematical constant known as pi works, because I want to get to the part we’re all waiting for: PIE!

Because pi without the “e” is far less delicious than the kind with the “e”, many people celebrate Pi Day by baking pies! Sadly, we didn’t have a chance to bake and eat all of our favorite pies here at CMNH, so we did the next best thing: Conduct a Pi Day Pie Survey! We surveyed our staff, volunteers, and two school groups – one from Sanford, ME and one from Kennebunk, ME – and asked them a pretty simple question. 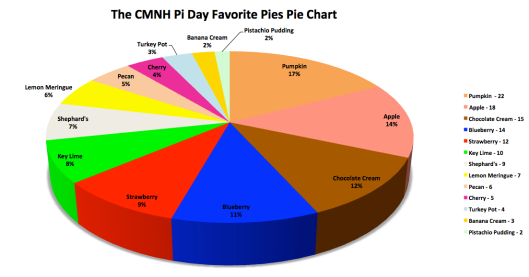 {Click on the chart to see a bigger version!}

Here are the very scientific (and questionably nutritious) results! How did your favorite pie fare?

We hope you’re all having a delicious Pi Day!